Over the coming months, Reds Independent will be posting a number of articles from the past that for one reason or another never made it into print. With the football kicking off again this weekend across the water, RI delve into the archive to look back at the emerging talent that would one day become one of Ireland’s brightest EPL stars. 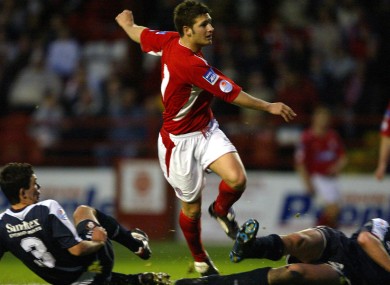 One of the few resurfacing criticisms of the current Reds side is that sometimes the midfield lacks creativity and guile. Undoubtedly valued and effective, the pragmatic midfield partnership of Byrne and Crawford is often accused of sacrificing flair for attrition and workmanlike displays. This often has the negative effect of the attacking options becoming a little one dimensional and direct, where at times the football takes on the appearance of that which occurred under Keely. Thankfully, the belated return of Joey Ndo would seem to redress this. Joey was fantastic last Monday week when he came on against Portadown at Shamrock Park. His passing was crisp and accurate, his vision superb, and was very unlucky not to get that crucial second goal with a lovely curling effort that just went past the keeper’s left-hand post. Hopefully, he can get a run in the team and generate a few more attacking options for the Reds.

However, it would be particularly unfair if this issue went by without recognizing the impact Wes Hoolahan has made this term. Wes has been phenomenal this season, and it’s great to see this acknowledged with an extended run in the team. His marvellous dribbling skills are as good as ever, but what has really added to his game is his physical strengthening. One of the reoccurring complaints about Wes over the past few years was that he was a bit lightweight and hence a liability in midfield due to the physical nature of domestic game. Clearly, he’s been working on his physique and this has added a dimension to his game. The days when some hardened EL veteran could brush Wes off the ball easily thankfully appear to be in the past. In the game against the stains here at Tolka, the combination of his strength and skill has often too much for them to handle and were forced into fouling him continuously. His pace and trickery ensure that the opposition are in for a tough game when they play against him. Hopefully the refs will give this gifted star the protection he needs and deserves, as there’s enough “footballers” in this league willing to kick lumps out of players like Wes.

Another criticism some fans have of Wes is that there is still a tendency for him to take too much out of the ball and try to beat the entire opposition on his own. Whilst this remains the case a little bit, it should be acknowledged that this has been restricted somewhat this season. In fairness to Hoolahan, I think that this aspect of his game is something fans should accept as an unfortunate consequence of such a talented player. A player of this calibre will often instinctively do these things. And while this can unquestionably frustrate supporters at times, it can equally excite and delight them on other occasions.

Also, Hoolahan’s passing has improved this term too. I think he’s realised that not every pass has to be the killer pass to set up a chance. Now, he is willing to give the simple ball. Having said, when Wes does play a well timed through ball, it’s usually to devastating, defence-splitting effect. His delightful pass through to Stewy Byrne for the third and critical goal against the scum in April is an example of this. I also think his crossing has come on leaps and bounds. Wes has had a good run at left-wing the last few weeks and he capped that with a precision cross for Jayo’s goal at Shamrock Park. His overall awareness has improved, and he seems less reluctant to have a shot now either-as demonstrated with his well-taken goal against pats.

Overall, it’s great to see such a raw talent develop as a player with Shels and go some way to fulfil his massive potential. Well done Wes.